This web page gives basic information about U.S. currency and various coins in circulation. U.S. currency is produced at U.S. Treasury locations in Washington, D.C., and Fort Worth, Texas.

Every coin has the phrase “IN GOD WE TRUST” and “E PLURIBUS UNUM” (Latin for the phrase “From many, one”).

Worth 1 cent. A penny is a copper-plated zinc coin.
It has Abraham Lincoln on one side and the Lincoln Memorial on the other.

Worth 5 cents. It is made of a nickel and copper blend. It is larger than a penny.
It has Thomas Jefferson on the front and Monticello (Jefferson’s colonial plantation) on the back.

Worth 10 cents. It is made of a nickel and copper blend. It is smaller than a penny or a nickel.
It has Franklin D. Roosevelt on the front and a torch on the back.

Worth 25 cents. It is made of cupronickel. It is larger than a nickel. It is about the same size as an Indian 50 paise coin. It has George Washington on the front and either a United States emblem or a design of one of the 50 states on the back.

It is a very useful coin, as many coin-operated machines, such as washers/dryers, candy machines, airport trolleys, and parking meters accept only quarters. 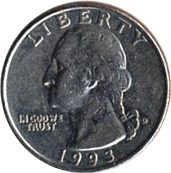 Not So Common Coins

Worth 50 cents. It is the largest of U.S. coins. It is a silver-over-copper coin.
It has John F. Kennedy on the front and the Presidential Coat of Arms on the back. 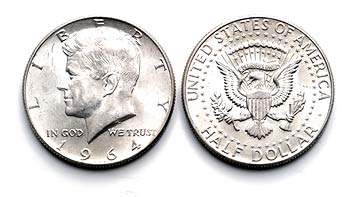 It is worth $1. It is made of a manganese-brass alloy.
It features native American heroine Sacagawea on the front and a bald eagle on the back.